Electric cellist and vocalist Jami Sieber reaches inside the soul with compositions that are contemporary, timeless, lush, and powerfully evocative. Sieber’s musical path has traveled from classical to folk to rock/pop where within her popular band “Rumors of the Big Wave,” she garnered the coveted Northwest Area Music Association (NAMA) Award for Best Rock Instrumentalist.

An innovative musician, Jami’s music moves beyond the surface, seeking and re-seeking her truth by creating musical bridges and connections, committed to doing what moves her and inspiring listeners with her honesty, musical prowess, and humanity. She transforms her solo instrument into an orchestra of sound that opens the heart, defies the mind, and sets the body dancing. Jami’s life-long commitment to the environment, social justice, and the healing arts is at the heart of her music, reflecting a deep dedication to the arts as a medium to express the interconnectedness of all beings.

Jami’s style of performance has been recognized internationally. This sometimes ethereal, sometimes hard-edged musician has earned rave reviews throughout Europe, Asia, and North America, and has been an invited guest artist in China, Russia, the Balkans, Italy, France, and Thailand.

Ferron is iconic in the genre of women’s music. In addition to being one of Canada’s most famous folk musicians, she is one of the most influential writers and performers of women’s music, and an important influence on later musicians such as Ani DiFranco and the Indigo Girls.

Ferron is a real salt of the earth singer who approaches her art with both sleeves rolled up, ready to dive in. When she was 15, she hit the road alone. She had a single shopping bag with a change of clothes, a toothbrush, a waitress uniform, and a Leonard Cohen LP. Little did she know then, but one day her own songs would be compared to Cohen’s for their depth of word-craft, intimacy, and wisdom.

Over the course of her four decades performing, she has continued to walk her talk. She performs with courage and commitment, her heart exposed through songs that don’t sound composed and sung as much as they feel wrung from the sweat and toil of hard fought experience. The contents of her songs appear as if they’re lived out on the canvas of her life and not just inside the confines of her art.

From the mid-eighties on, Ferron’s songwriting talents have been recognized and appreciated by music critics and broader audiences, with comparisons being made to the writing talents of Van Morrison, Bon Dylan, and Leonard Cohen.

Outdoors on the Great Lawn at Open Space. Bring blankets and chairs! (Note: that any especially tall chairs will be asked to park along the sides of the seating areas to allow everyone to see the stage.) 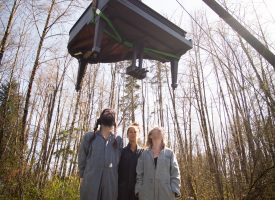 Up Up Up Circus Show

UMO PRESENTS: Up Up Up Circus Show returns to Open Space! Acrobats! Illusions! Live music! Opera virtuoso! Human ceiling fan! Flying piano! What do an opera virtuoso, an antique flying piano, a human ceiling fan, and the world’s largest wedgie have in common? For one day only, they will be on stage as part of … Continued 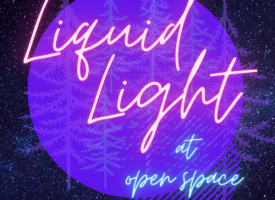 Liquid Light Returns After a glowing 2021 premiere, Open Space for Arts and Community and production company CymaluX have teamed up to bring the island the return of  Liquid Light, an ongoing series of light shows designed to delight all ages. This event is open to the community and the cost of admission is a … Continued