Thank you to all who joined us at Open Air August 3rd! It was a beautiful day with a record breaking crowd and truly remarkable performances!

Every year, Open Space for Arts and Community composes a giant love letter to Vashon in the air. This year’s Open Air Outdoor Aerial Festival showcased professional touring aerialists, regional aerialists, and UMO school graduates and current students all performing for a record-breaking Vashon crowd on a flawless summer day.

Here are just a few of the beautiful photos that were taken by Michelle Bates at Open Air:

UpSwing Aerial Dance Company (Berkeley, CA) is a contemporary aerial dance company that features the repertory of Artistic Director Cherie Carson. The Company has been presented nationally in Atlanta, New York, Seattle, Houston, and San Francisco, and of course, on Vashon Island! UpSwing focuses on inspiring a love of original, aerial dance and that the idea of dancing in the air can be extended to reveal human imagination, our relationship to each other and to one’s inner self. Dancers include Kirstin Brown, Helen Fitanides, and Helium Valentine. 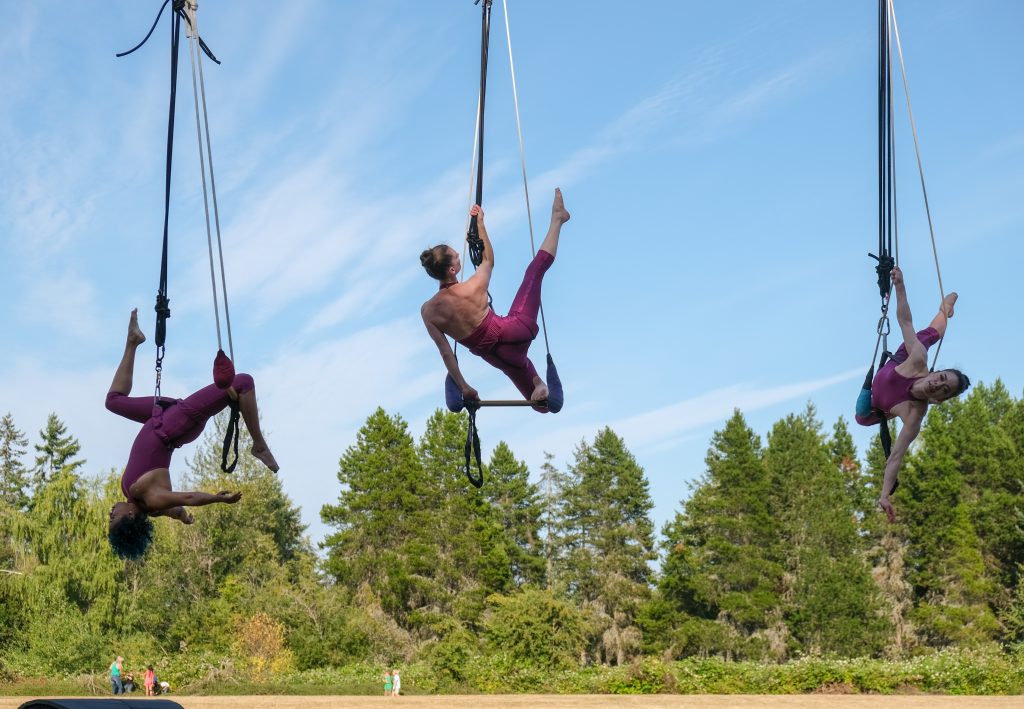 Shannon has spent many years developing her love of movement and curating her unique and expressive style. She currently lives north of San Francisco where she is commencing her new work, The Sentience Project. 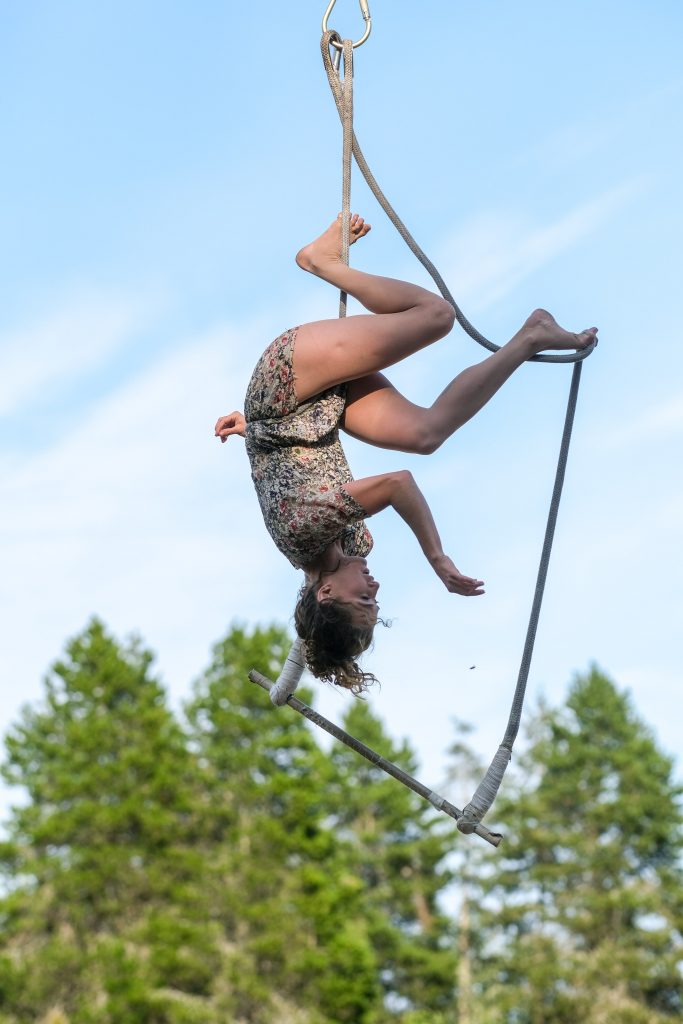 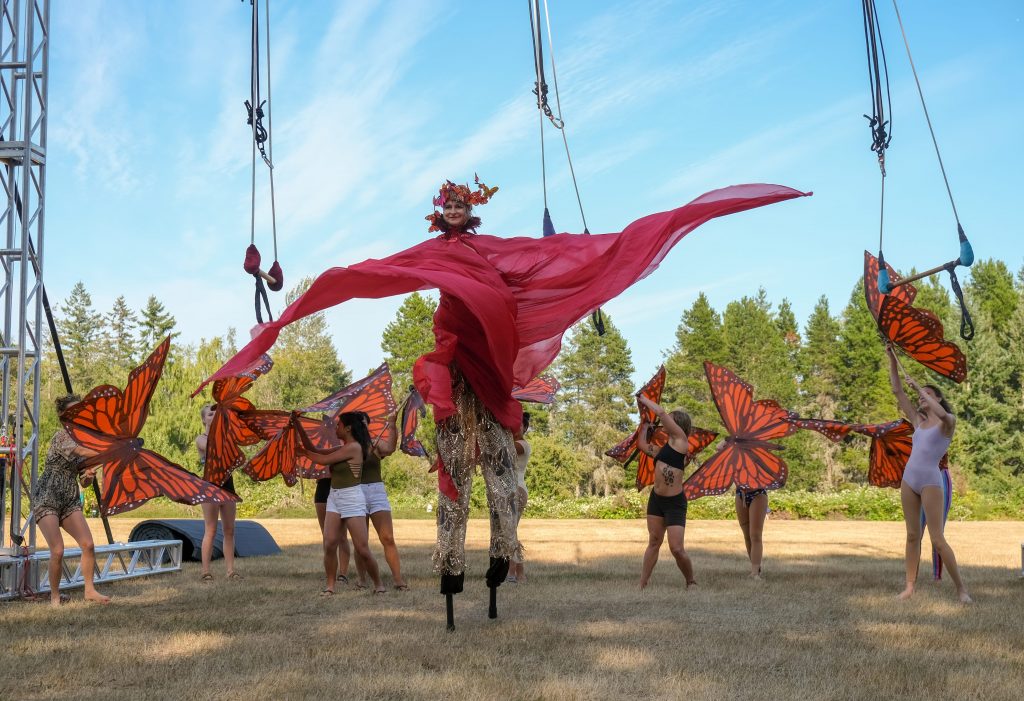 Madeline Schroeder & Solrun Heuschert have been studying aerial for many years. They have been teaching themselves doubles trapeze since 2015 and love performing together, and it was a joy to see them perform at Open Air! 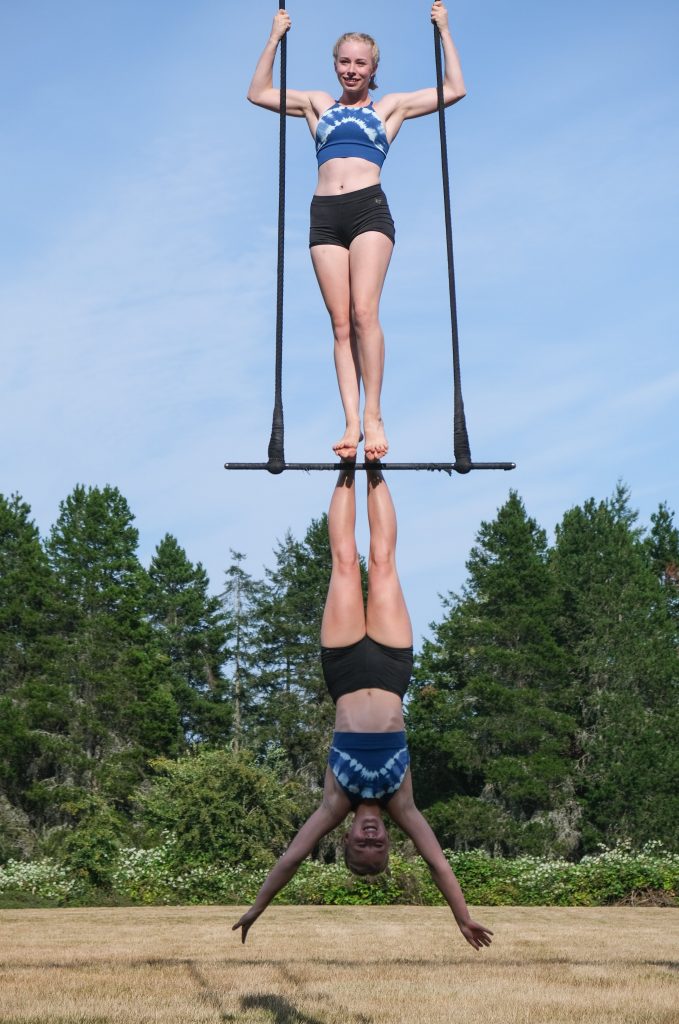 Danya Volkov currently studies at Versatile Arts in Seattle, and her current interests in the air include translating dynamic rope movements to fabric, hanging from one elbow, and spinning like mad! Most recently she is a member of the performing company Unfiction Works, and we’re glad she could make an appearance out in the meadows at Open Air! 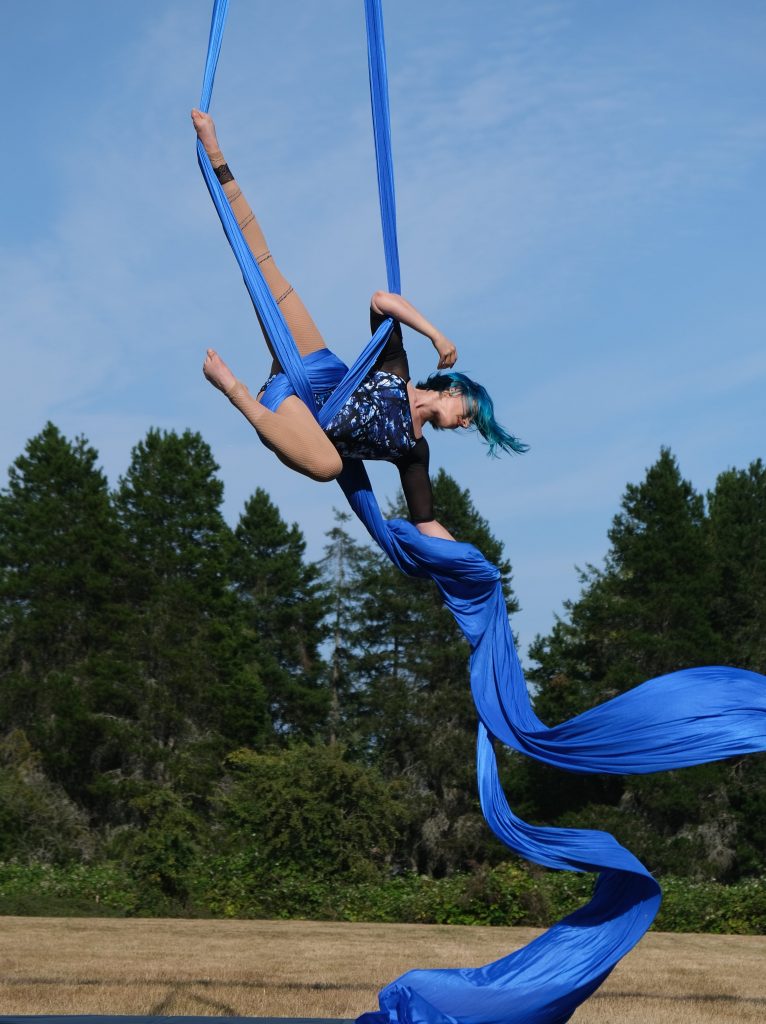 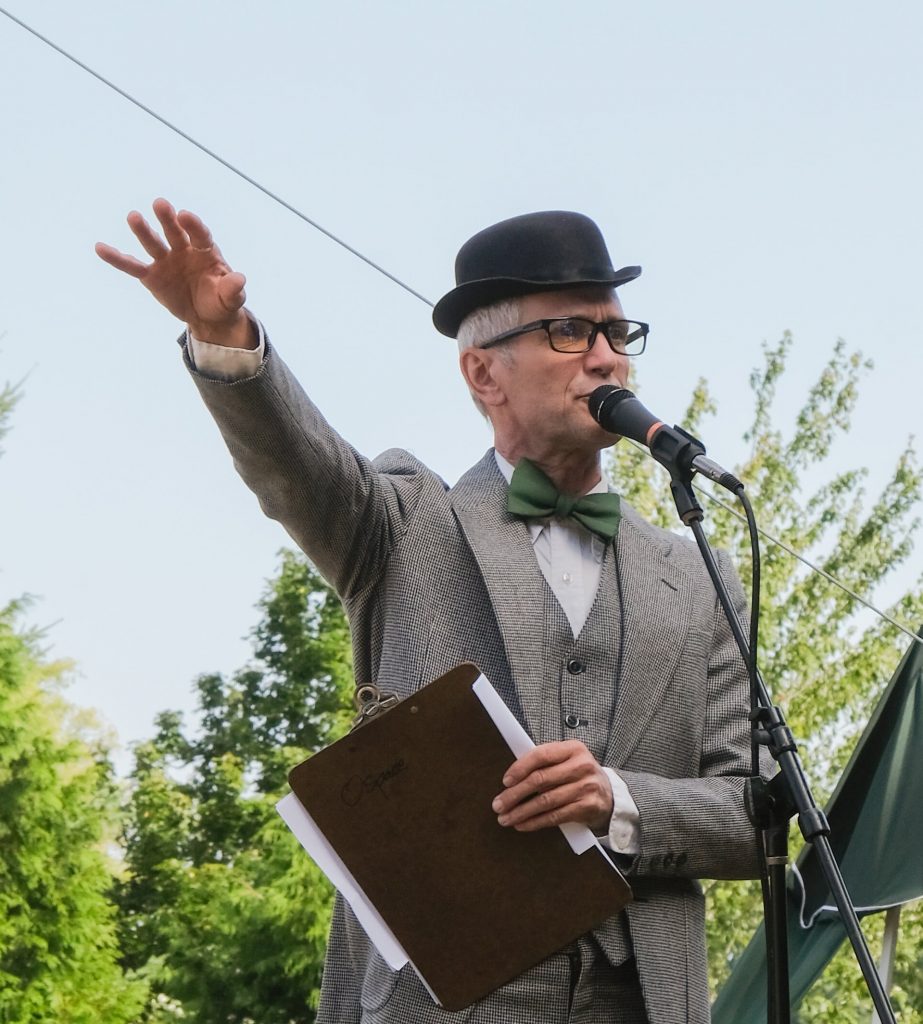 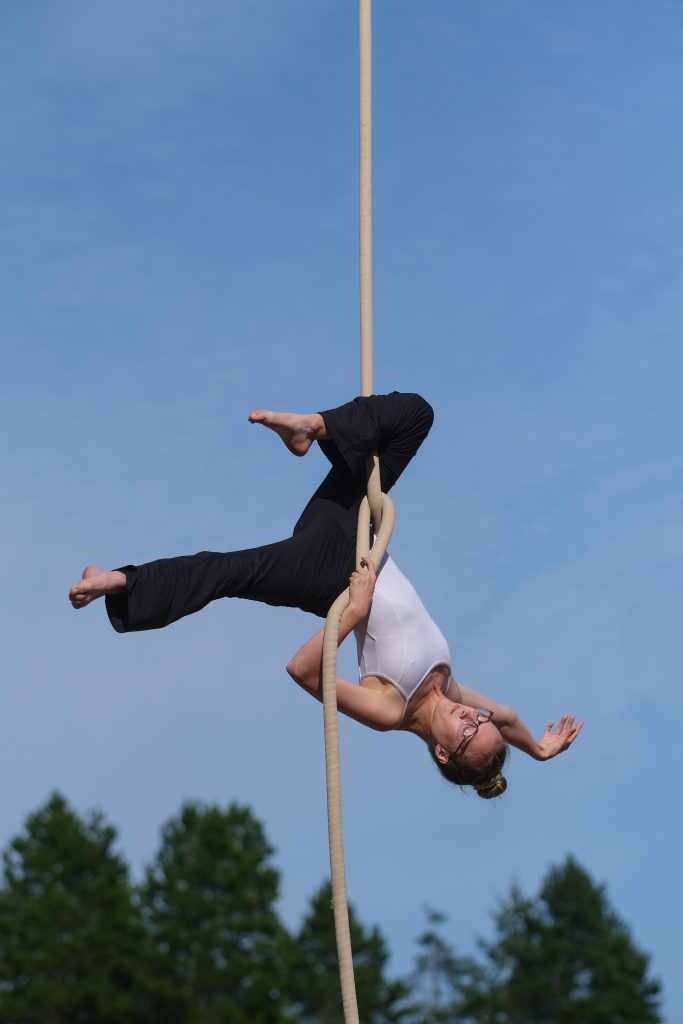 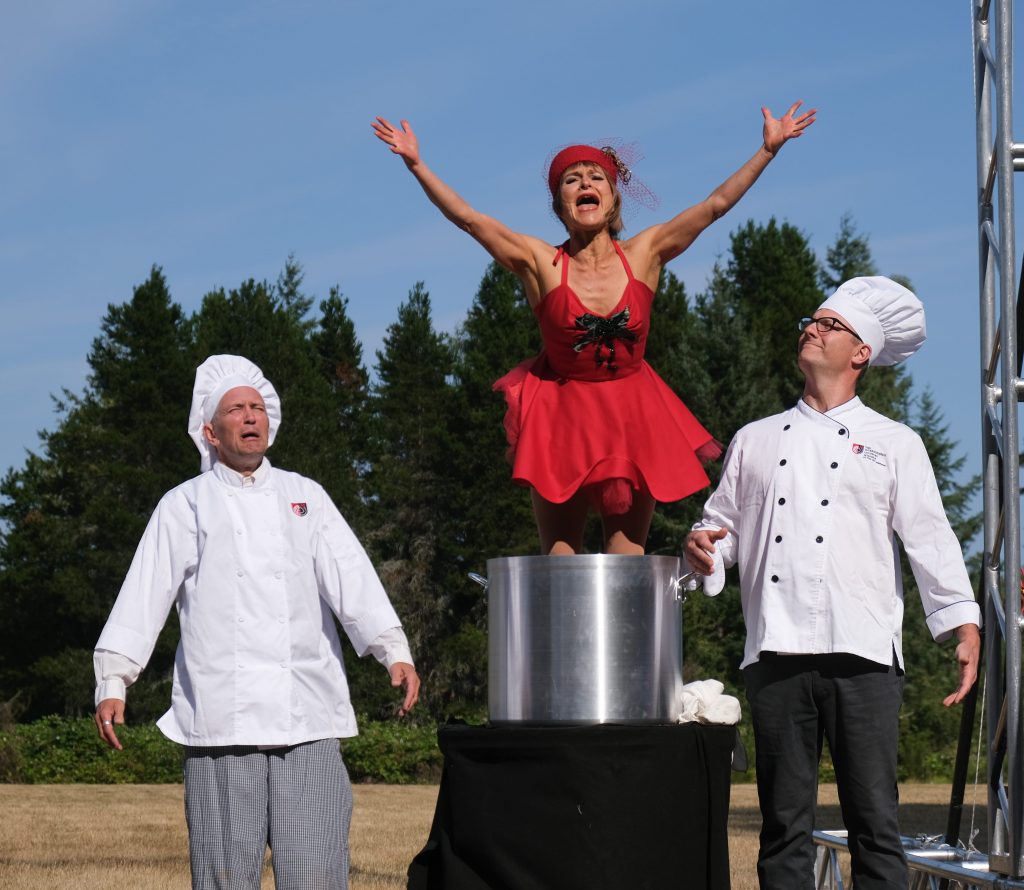 It was great to have Alysson Komarzec (aka Thy Alybaba) at Open Air for the third year in a row. She has continued to grow in her authentic expression/artistry through the ways of theatrical dance. Always leading with Heart, with Spirit, she has evolved to now be introduced as a Spirit Dancer or Artist of Spirit. 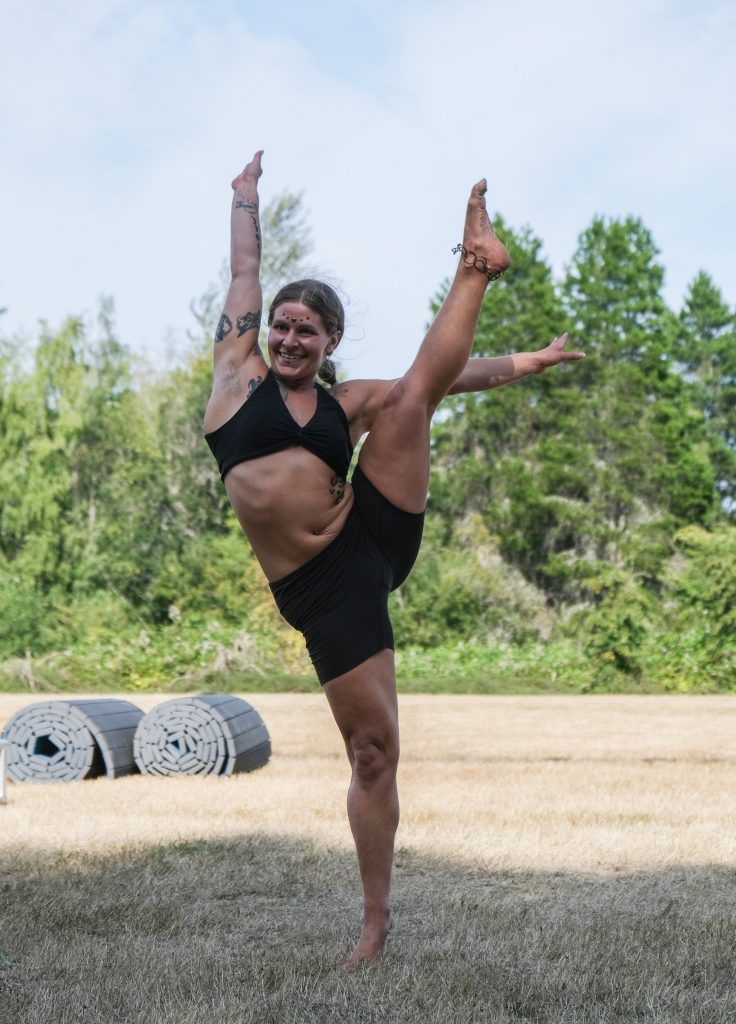 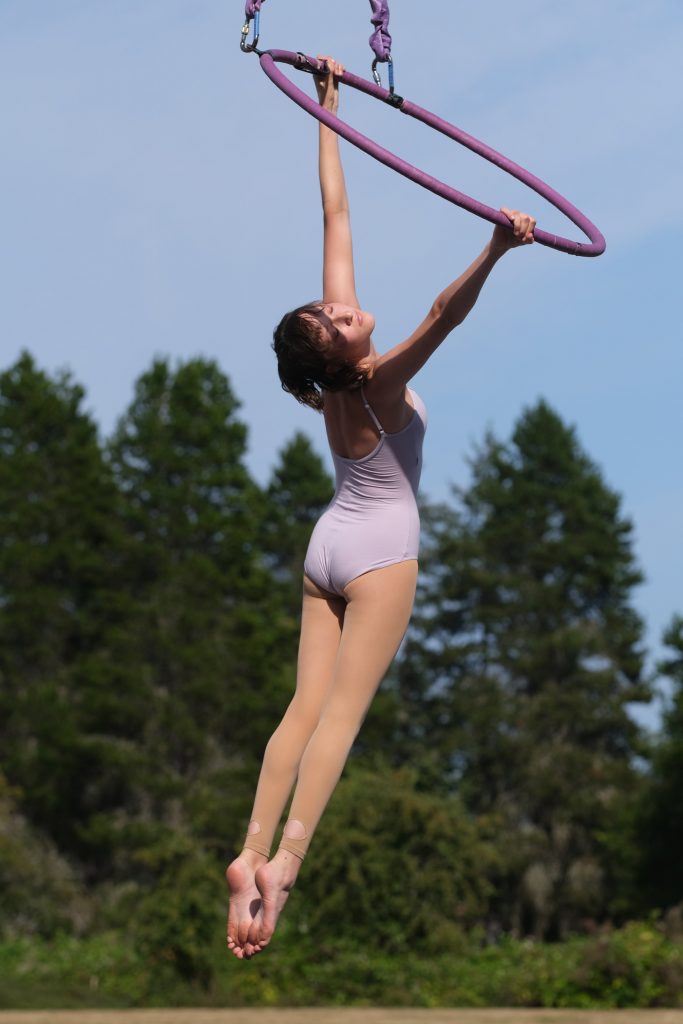 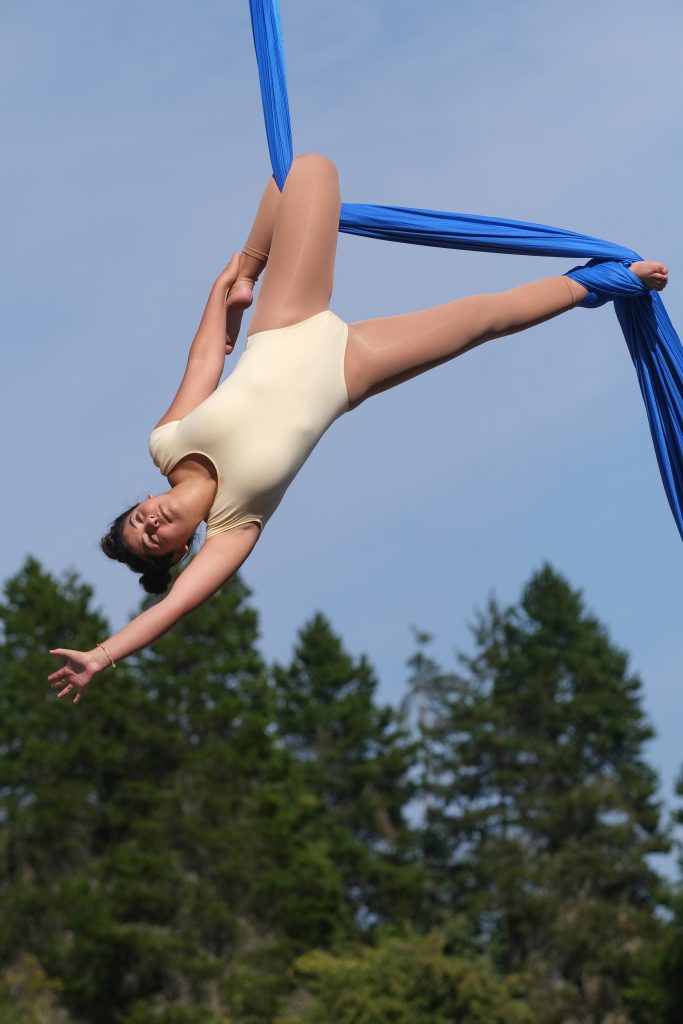 Sadie LeDonna and Shawn Kellogg teach at UMO School of Physical Theater on Vashon Island and at Seattle Acrobatics and New Circus Arts, and they have been teaching and performing together for over 5 years. They have received training in aerial arts, acrobatics, handstands, hoop diving, trampoline, dance, and clowning in San Francisco CA, Seattle WA, Brattleboro VT, and Quebec City. Sadie and Shawn also recently founded Pop-up Movement, a fledgling movement arts organization. Look them up online at pop-upmovement.com! 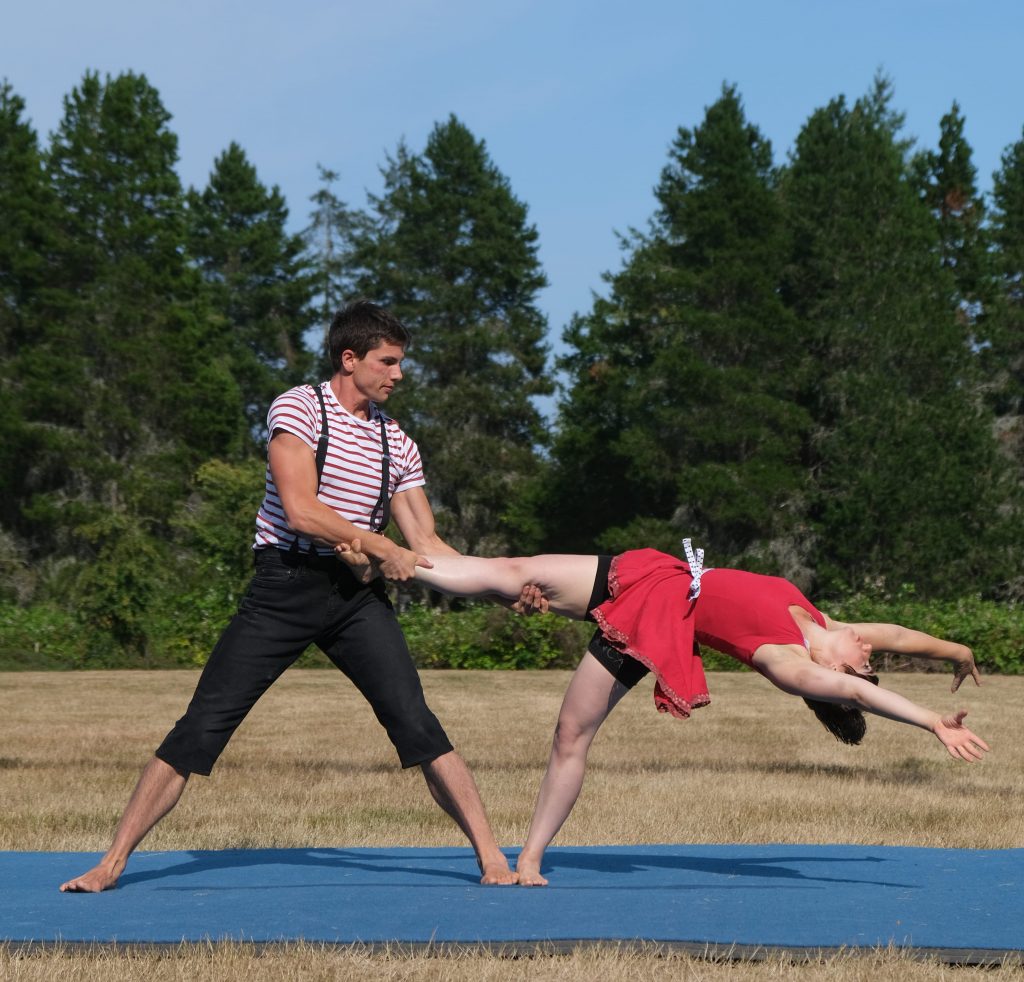 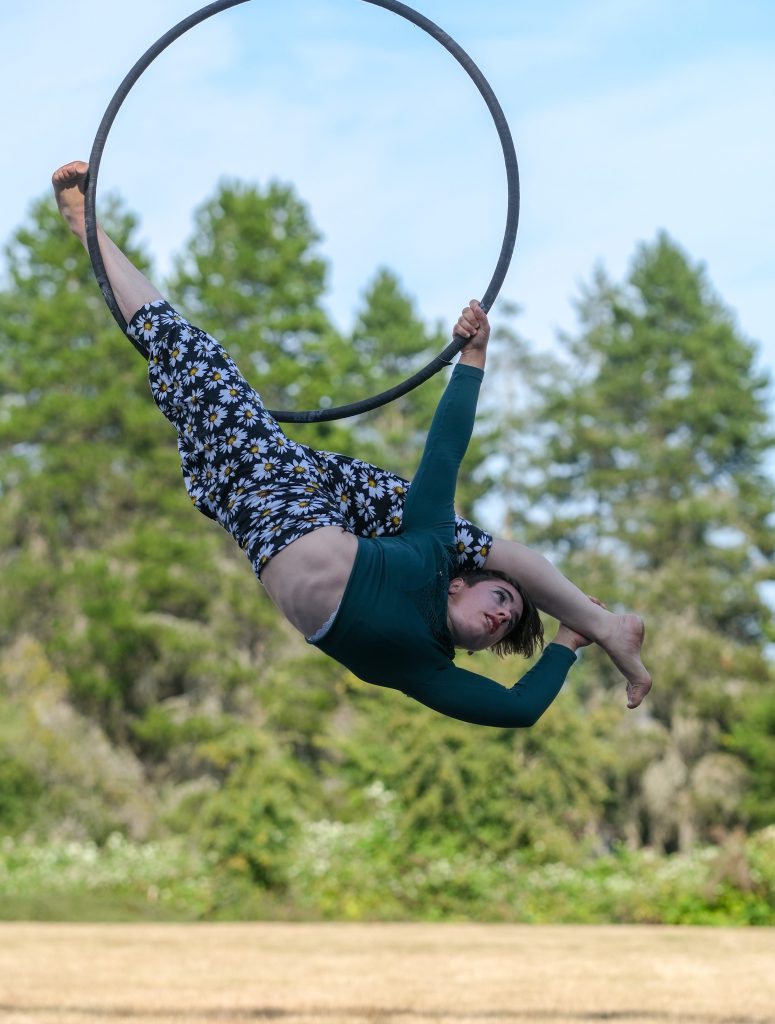 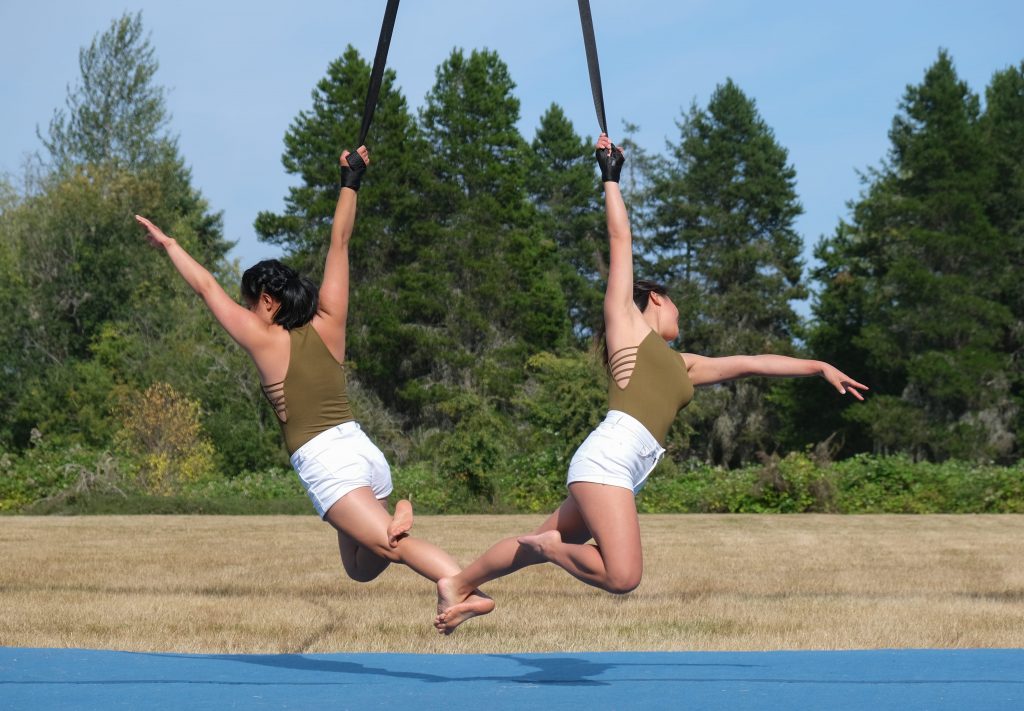 Raena Joyce (12 years old) is one of our talented students from #VashonIsland. She has been climbing and swinging and hanging since she could crawl. She first studied aerial when she was six years old with Martha Enson and has been taking lessons with UMO School ever since! She plans to run away with the circus someday. 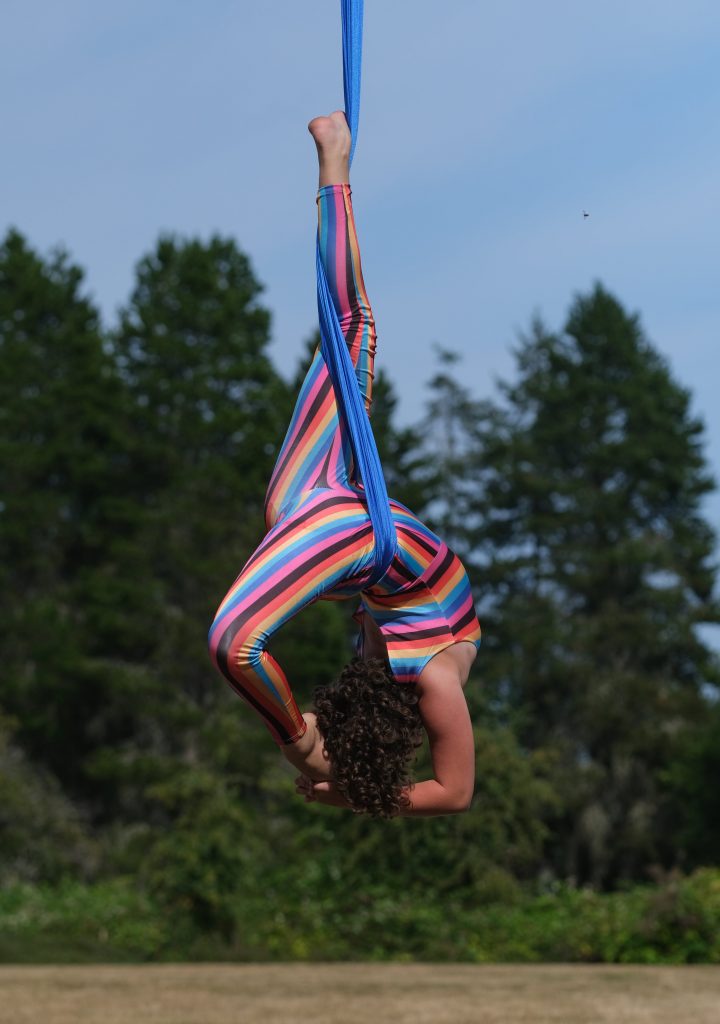 Thomas Hitoshi Pruiksma is an author, poet, translator, teacher, magician, musician, and lover of life. His book of poems, The Safety of Edges, appeared earlier this year. Thomas has set the tone for Open Air for many years with his original, magic infused opening act every year! 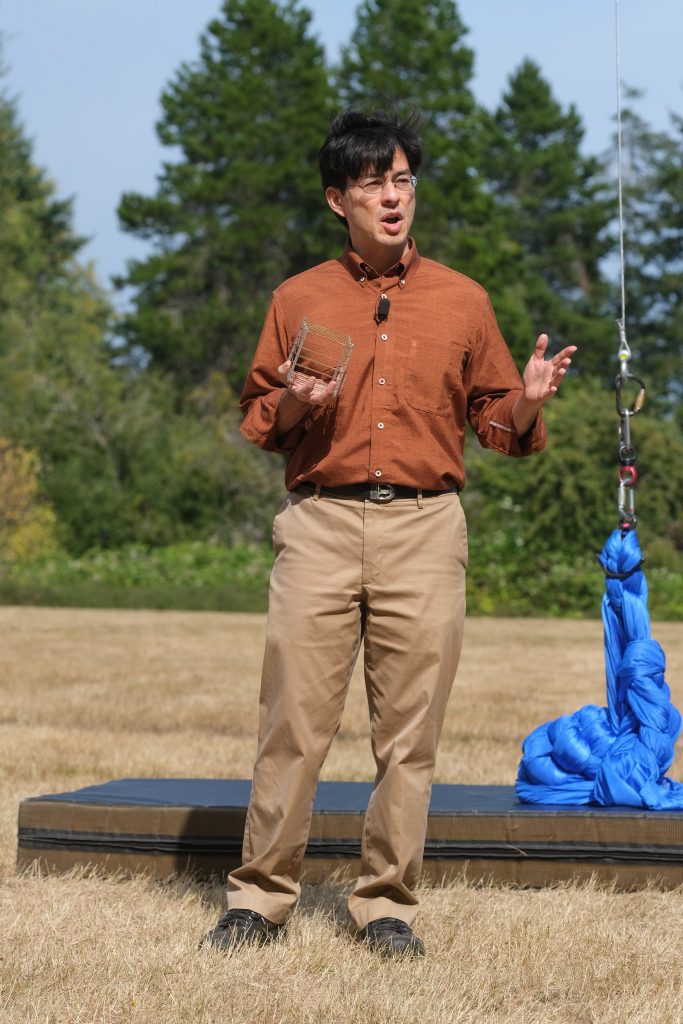 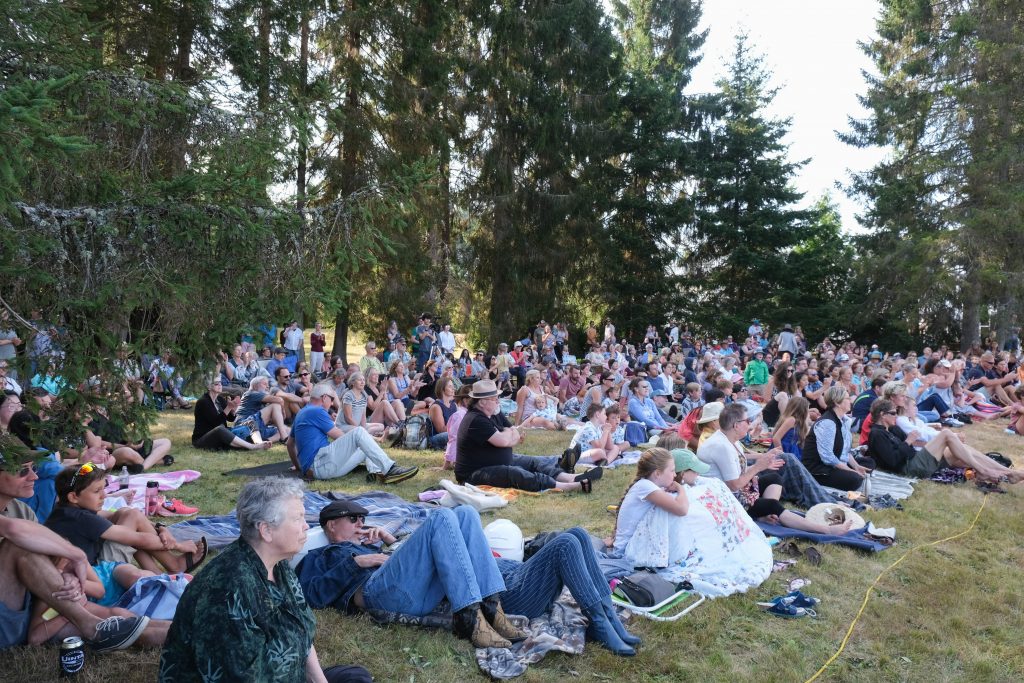 Thank you to all of the many hands that bring this show to life every year.